Let's talk about how to format code and name things. 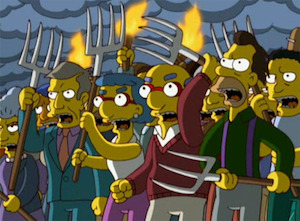 I remember when PSR-1 and PSR-2 became a thing. Jeez that "use only spaces" thing was just ridiculous, I knew that tabs where better (right?). And those crazy formatting rules were the opposite of what I was used to. Nonsense! One day I did the jump and after a few weeks, I just didn't care anymore. I was over it, just like everyone else did, and PSR-2 was my new religion.

Fast forward a few years and I'm at a talk where the speaker argues to use snake case for naming test methods. Dude, you crazy? We just finally got consistent style across all the PHP world! And we all know that camelCase looks much better right? How can I go against PSR-2? It turns out, after trying it, that this was a wonderful idea…

Habits are sometimes making us blind. We think X looks prettier than Y but that's just the habit speaking. In this article I'll try to take a rational approach at coding style. That means leaving the "it looks ugly/better" at the door.

If at any point you feel like something "just doesn't look good", breath in, breath out, and try it! Nothing beats hands-on experience, not even some random article on the internet :)

As you can see, the last item ends with a comma even though there is no extra item after it. It's perfectly valid PHP, the trailing comma is simply ignored. Now consider this example which is not using trailing commas:

Let's add a new value to the array:

Here is the diff we generated in the commit:

With trailing commas, the diff looks like this instead:

As you can see, trailing commas lead to simpler and cleaner commits. This is also very useful when using git blame: each line points to the real commit that added it. Conclusion: use trailing commas.

It's interesting to note that there's currently a RFC to allow trailing commas everywhere in PHP (not just arrays). Obviously, I think it would be a great addition to the language for the reasons explained above, as well as for the sake of consistency.

This practice is fairly common, though not universal. PSR-2 doesn't state anything about it, but many projects enforce such rule. Here is an example with phpdoc:

And here is another one with arrays:

Anyone who has ever modified such code knows: it's a pain. Sure it may "look good", but when modifying that you have to fill in all the extra spaces to keep the alignment. One may argue that an IDE can re-arrange that for us, but even then let's look at the diff when adding a new item to an array:

Now all the git blame information is lost and the commit is almost unreadable.

Alternatively, if you don't bother keeping the alignment:

The whole point of the alignement is lost, and there goes consistency.

Another example following an IDE refactoring (LoggerInterface was renamed to Logger):

We have all seen that!

To sum up on aligning values:

Conclusion: do not align things with spaces.

Using phpdoc to document classes, functions, methods, etc. is good practice. However code considered as "well documented" usually looks like this (on GitHub):

There is much content in this docblock, but most of it is duplicated from what developers or tools can already get from the source:

In reality here is what the docblock provides that isn't provided by the code itself:

The docblock could be reduced to this:

On top of being information overload, the duplication also becomes a problem when the code changes. Everbody has seen a docblock that doesn't match the method it describes. When information is duplicated this is much more likely to happen.

All of this is becoming even more interesting with PHP 7 (coming with scalar type-hints and return types). Here is another example to illustrate that:

With PHP 7 the docblock would become entirely useless:

Conclusion: use docblocks only to add information.

This is a topic that has already been debated (the first link is the best by the way) so let's get right to the point: in most cases, there is no need to have Interface in the name of an interface.

In the end, when we use the name Cache we either type-hint against the one implementation (no interface exists), or either against the interface. All is well!

I believe we have issues with this because :

But even though this is challenging our habits, getting rid of *Interface forces us to think: better names and no unneeded interfaces.

Let's keep in mind however that in some cases (for example in libraries/frameworks), interfaces are introduced only to allow a third party to replace the default implementation. We then have an interface with one implementation (other implementations are to be written by framework users). Given that context isn't the same as what was described above, it's harder to apply the same principles. In that case I can only advise to use critical thinking :)

What, again the suffixes? Yes!

this section is inspired from Kevlin's mind-blowing talk

Here is where we use exceptions in PHP:

That means that everywhere an exception class will appear, we will know it's an exception. Having the Exception suffix is then completely redundant.

Let's take an example: UserNotFoundException. The suffix brings absolutely no value. Even worse, it makes the (perfectly valid) sentence more obscure: UserNotFound is everything we need.

What's even more interesting is that, in some cases, removing the Exception suffix makes the name look quite bad. As an exercise, let's remove the suffix from Symfony Form's exceptions. By the way I'm taking examples from Symfony not because I believe it is bad code, but on the contrary because it is a very good code base (thus making the point stronger).

First let's start with the exceptions that would make perfect sense without the suffix:

Those sound like perfectly valid english sentences that explain an error.

Now let's look at those that sound more like an information than an exception or error:

Imagine that situation in real life: you want to get on the bus, but the driver tells you "no, somebody already got on". You would probably ask "So what?". The driver's problem is maybe that the bus is full. It's the same here: maybe a form cannot be re-bound if it has already been bound.

Except RuntimeException and LogicException which are very generic exceptions (maybe they deserve to be more specific?), here are suggestions for the other two:

Not convinced? Have a look at your own code and do the same exercise, it might give you a new persepective on your errors.

Conclusion: the Exception suffix is unnecessary. Not using it also has the benefit of forcing us to come up with names that better describe an actual error.

In the end we only had a look at 5 actual examples, but I want to stress that the main point of this article is:

If you need to vent off on how some of this is stupid and ugly, there's a comment box below. I would also be happy to hear about practices you tried and you liked!