This article is part of a series of case studies of serverless PHP applications built with Bref on AWS Lambda. If you are not familiar with serverless and Bref, I invite you to read Serverless and PHP: introducing Bref.

This case study is about the returntrue.win website. This website was my first serious experiment with serverless and Function as a Service.

Returntrue.win is a "puzzle game for PHP developers". A piece of PHP code is shown. Users can fill the missing parameters and run the code. The goal is to make the code return true, then the user can move on to another level. 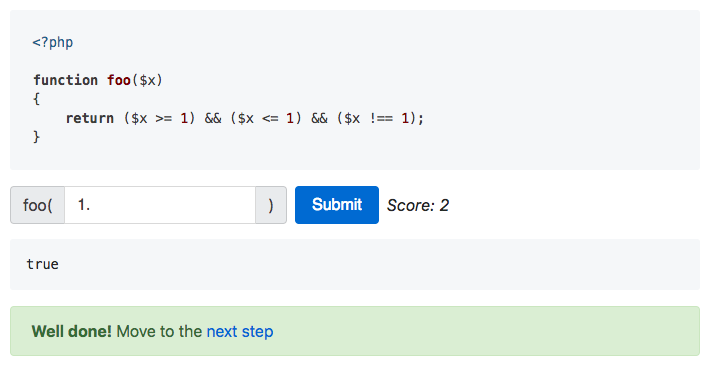 Not sure how to get the best scores? Check out this complete solution.

I chose DynamoDB because I wanted to discover that service and because it was cheaper than RDS. At first I wanted to store the data on disk in a JSON file but the distributed approach of lambdas, and the fact that the filesystem is read-only, put a stop to that. In the end I was happy with that choice and it cost me nothing. But again I stored so little in there that its usage isn't really significant.

This separation helps ensure that code submitted by users will not affect the website, even if it crashes.

I soon discovered that building a website with AWS lambda is a bit trickier than building an API. The whole thing is not built to handle assets (CSS, JavaScript…) out of the box. A simple solution is to put assets on a CDN such as AWS S3. Since my needs were very simple I decided to include Bootstrap from a public CDN and write a few lines of inline CSS. Not the cleanest solution but that just worked.

I released returntrue.win in February 2018 and it got a bit of attention on Twitter and Reddit. The website received a decent amount of traffic, especially the first days where I watched with attention the lambdas scale up and down.

As you would expect, I did not have anything to do except let Amazon take care of running my code for me.

As a developer I enjoyed not worrying about whether my server would be able to handle the traffic. However I have to admit I was worried about how much this would cost me in the end :)

In total, the first month cost me $3.

Needless to say I was relieved! The website has been running since and I pay close to $0 every month.

The majority of the cost was related to API Gateway as AWS Lambda has a generous free tier. Let's break it down:

While I hope this case study is useful, there are many things that could be improved:

And the website could definitely have a better design. I hope to open source the website at some point to allow users to contribute new levels.